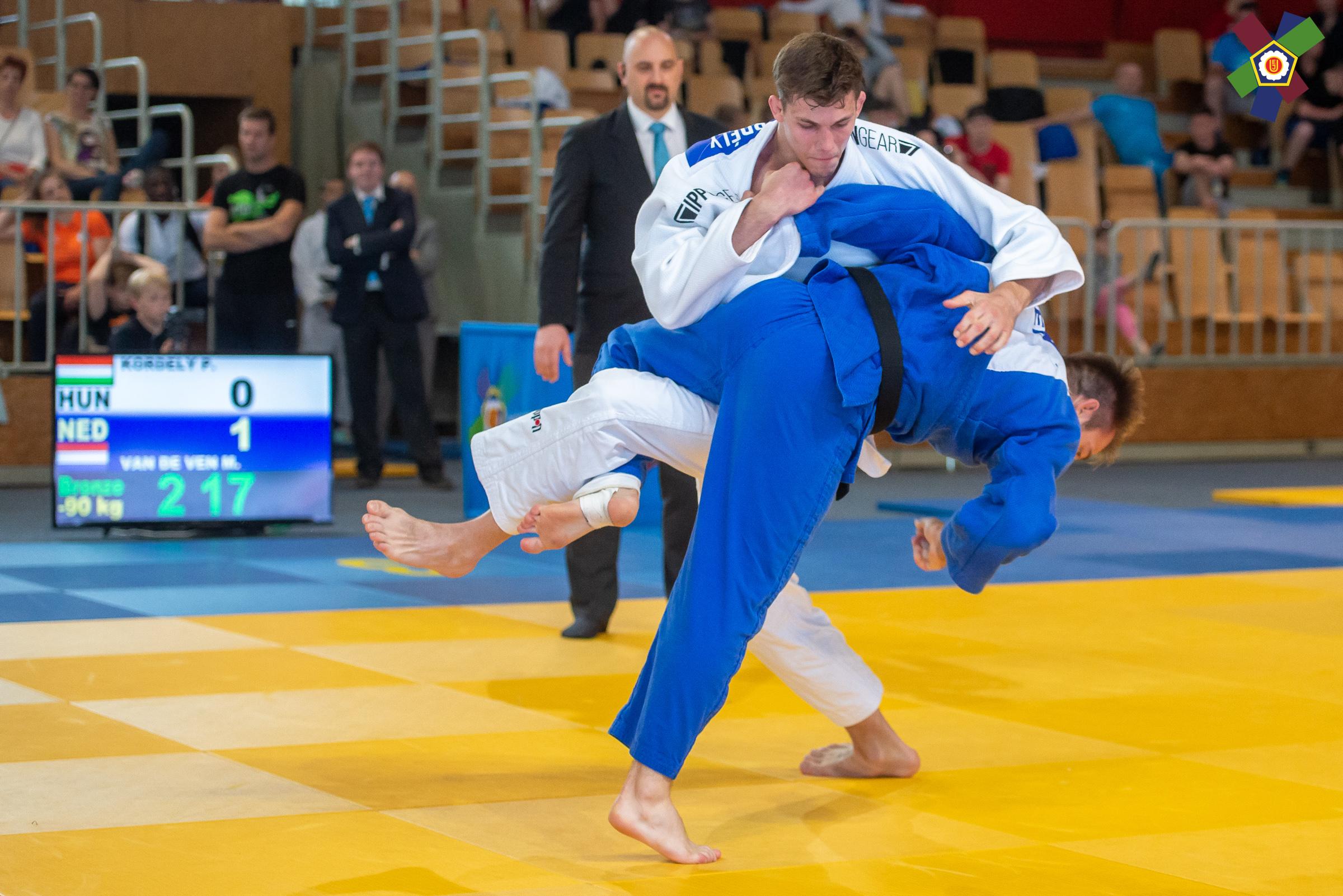 This weekend, the Senior European Judo Cup Tour had moved to Slovenia for the traditional Celje European cup. This European cup is known to be one of the toughest Senior European Cups and this year was no exception with 230 athletes from 24 different nations. 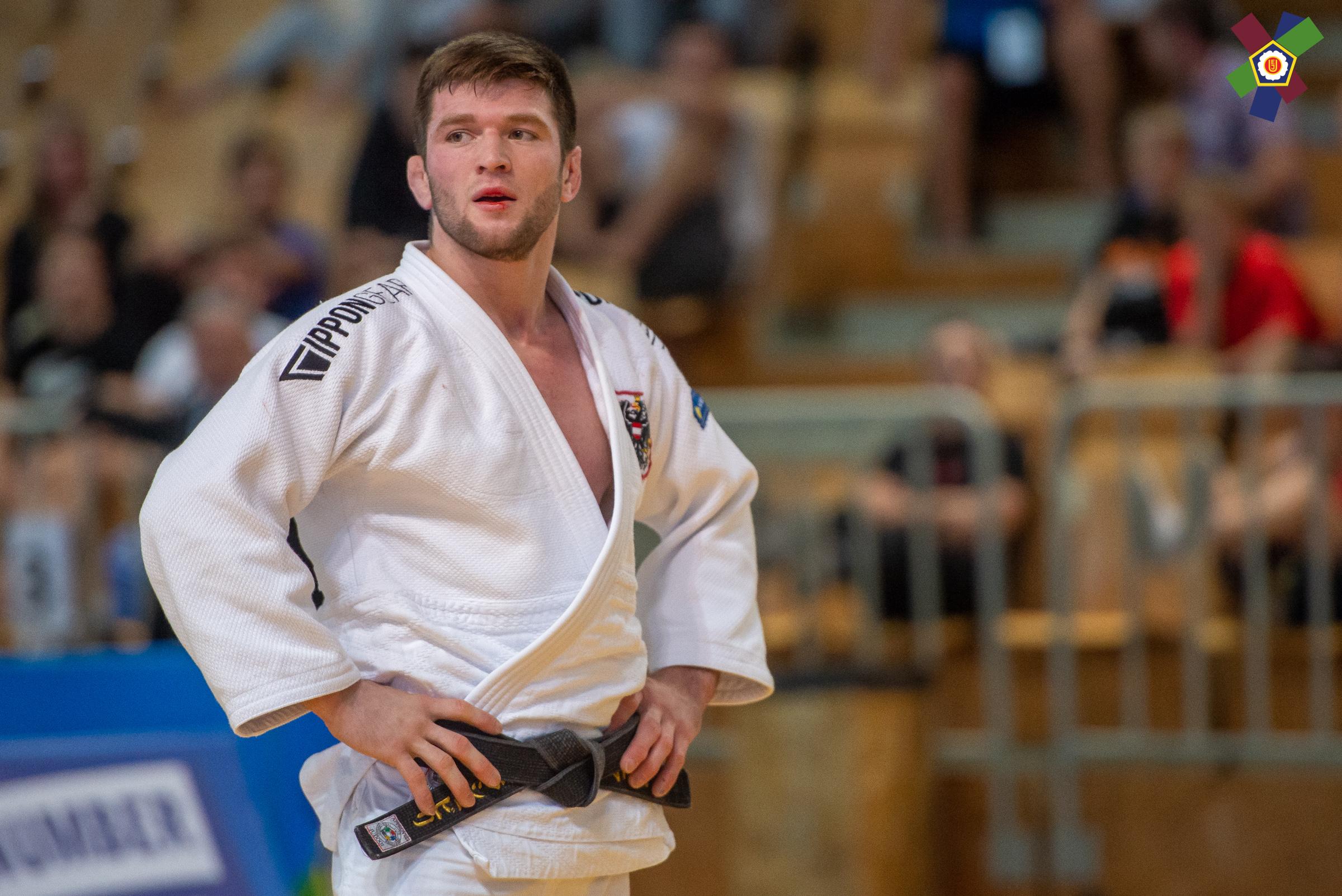 On the opening day of competition an amazing gold medal went to Bence Boros of Hungary in the category under 66 kg. Boros came into the tournament as the number one seed and did surely prove that he was worthy of that spot, showing great judo and ending the day beating home favourite Andraz Jereb by IPPON to take the gold medal and raise the flag for Hungary.

In the same category, a bronze medal went to Kimran Borchashvili of Austria. Borchashvili, lost out to gold medalist Boros in the preliminaries, but apart from that, delivered a great performance, winning all of his other five matches by IPPON to pick up a well-deserved bronze medal.

In the category under 48 kg, a silver medal went to Sofia Petitto of Italy. Petitto powered through the preliminaries and in the end of the day, the Italian lightweight could celebrate her first medal this year.

The podium -48 kg was close to being an all IPPON GEAR affair, as also Mira Ulrich and Mascha Ballhaus, both from Germany, picked up a bronze medal each.

Ulrich ended with a 5th place at the last edition of the Celje European Cup and this weekend, she could be delighted about changing that for a medal, and this in style - With IPPON.

Ballhaus did as well come up with an IPPON win to secure her bronze medal - Her second medal this season. 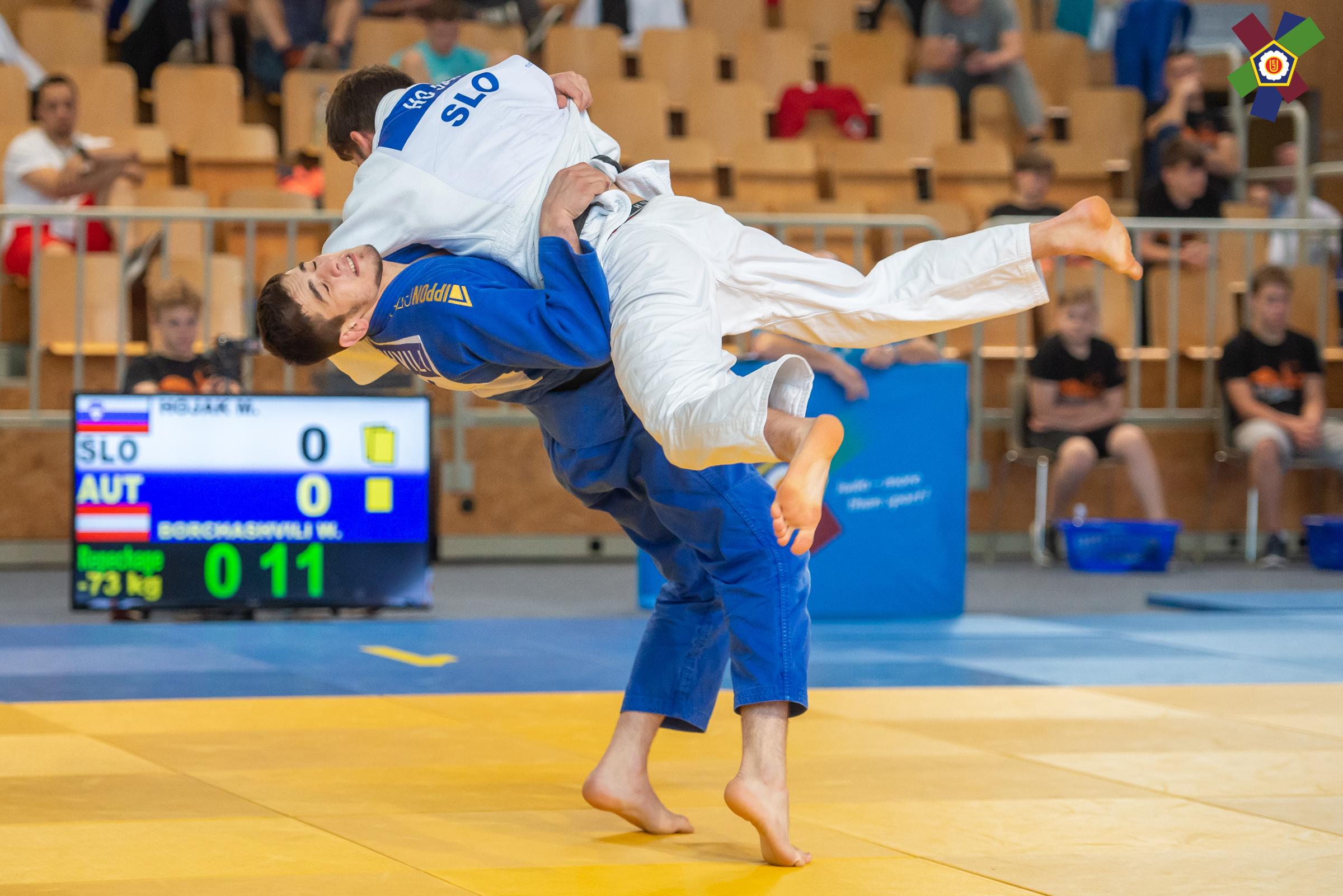 In the -57 kg category, Hungarian Kitty Kovacs, also had a good performance on the day and managed to take home a bronze medal. After finishing with 5th and 7th places in the last European Cups that she attended, Kovacs could be happy about picking up her first ever medal at a Senior European cup.

She could share the podium with another IPPON GEAR athlete, namely Seija Ballhaus of Germany. Ballhaus, as well, showed good judo throughout the day and made it all the way to the semifinal, where she unfortunately fell short. In the bronze medal match, the former Cadet World Champion came back strongly to take a convincing win.

Daniel Monori of Hungary came close to a medal in the -60 kg category, but unfortunately just missed out and had to settle for a 5th place in the end of the day - Nevertheless a good performance from the Hungarian, who could be happy about getting to the final block for the first time in a Senior European cup.

Also, Wachid Borchashvili of Austria just missed out on a podium spot in the -73 kg category. Borchashvili, who was very successful in the Junior division, did as well have a good performance on the day but is still looking to win his first medal at Senior level.

On the first day of the tournament also three athletes finished with 7th places: 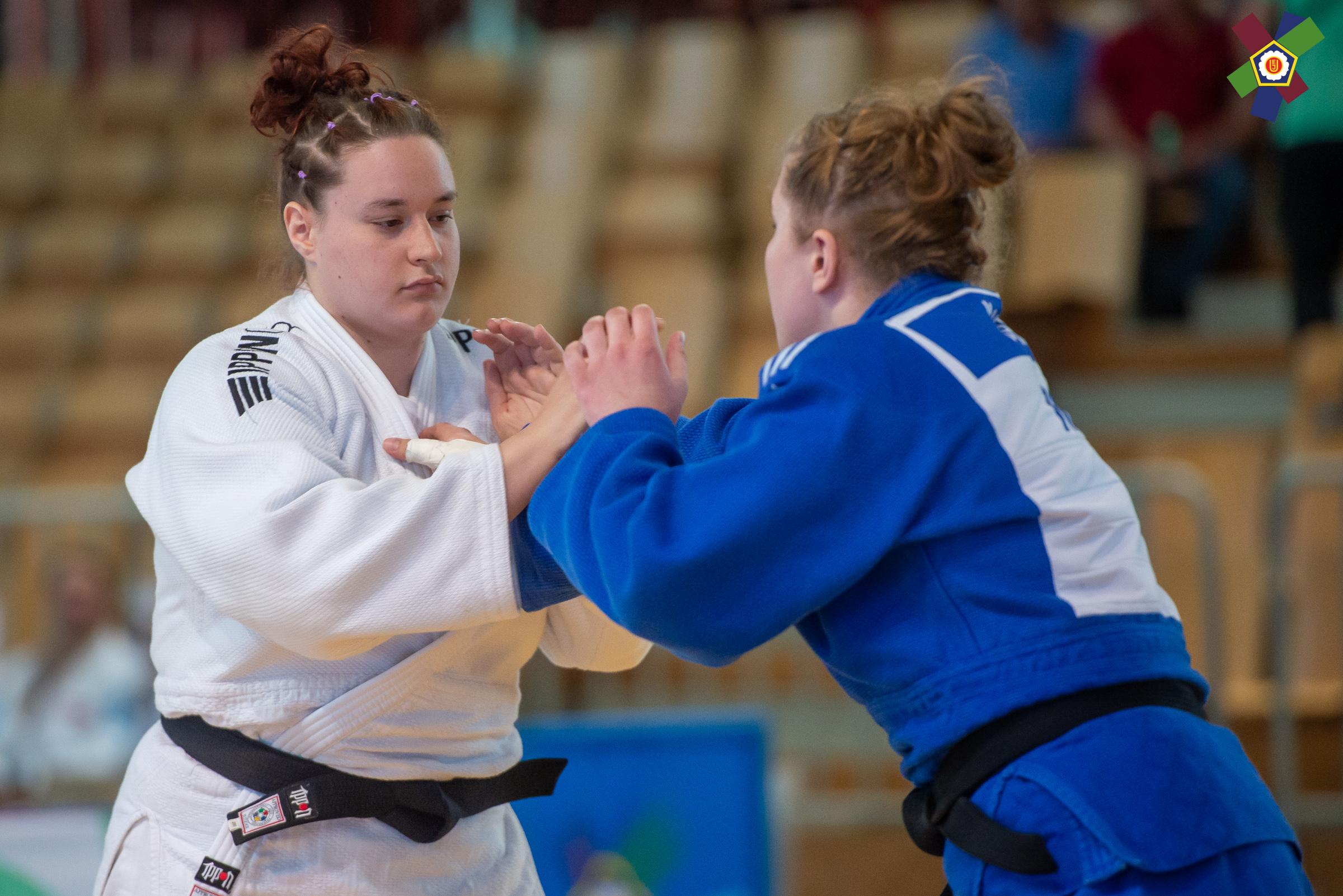 After a successful first day of action, the expectations were high for our heavy weight athletes but these were met in style, as not less than ten athletes managed to pick up a medal.

First and foremost, there was a gold medal for Benedek Toth in the category under 81 kg. Toth ended with a silver medal at last year’s edition of the Celje European Cup but this year, he was able to upgrade that to a gold medal after a convincing performance throughout the day.

Toth could share the podium with team mate Robert Rajkai, who ended up with a good bronze medal. Rajkai, as well, had a good performance on the day and could be happy about picking up his first Senior European Cup medal this season.

The team of Hungary could celebrate their third gold medal, as Mercedesz Szigetvari claimed the victory in the the +78 kg category. The current Junior European Champion seems to be great form at the moment and this weekend, she was able to pick up her second Senior European cup gold medal in only one months’ time.

In the same category, Szigetvari’s team mate Emese Karpati picked up a bronze medal. The Hungarians are spoiled for choice in this category, as also Karpati, who is U23 European bronze medalist, is a consistent athlete in the women’s heavy weight division. 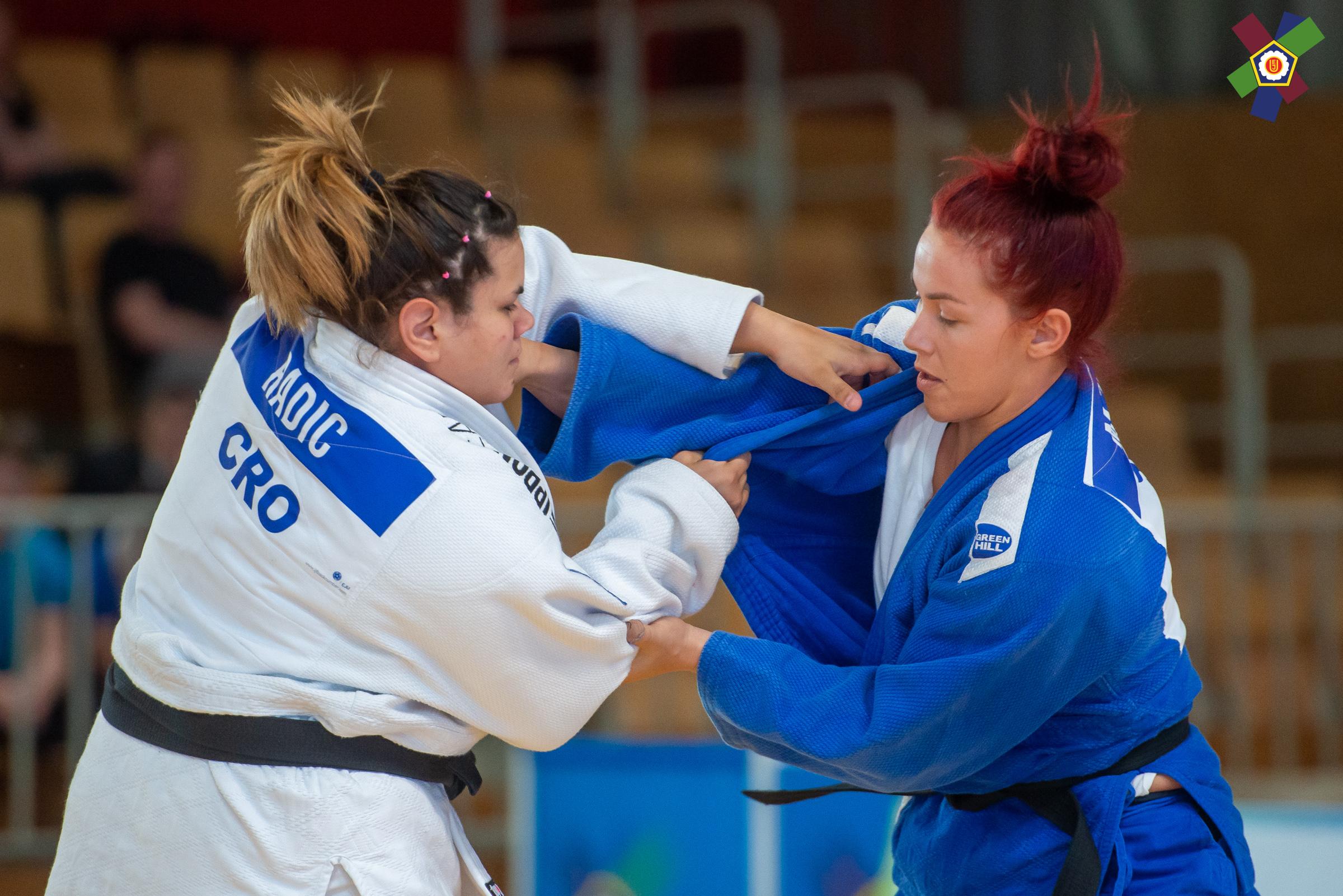 In this category, also Tina Radic of Croatia came close to a podium finish but had to settle for a 5th place.

In the category under 90 kg, the Hungarians could add another medal, as also Peter Kordely was able to pick up a bronze medal. Kordely showed good judo throughout the day and came up with some great wins, to secure his first European Cup medal since 2016.

Also, in the -100 kg category, there was a Hungarian athlete to be found on the podium, namely Zsombor Veg, who came away with a silver medal. Veg, who is only a first year Junior, had a terrific performance on the day, winning all of his contests, leading up to the final, with IPPON. A great day for this youngster, who can surely be proud of having won his first ever Senior European Cup medal.

In the same category, Mathias Madsen of Denmark picked up a good bronze medal. Madsen came into the tournament unseeded but managed to beat the number one seed on his way. The Danish athlete is, as well as Veg, still a Junior, but nevertheless, he already started to gain ground in the Senior division - This weekend, he could add his second Senior medal to his collection.

Also, Croatian Josip Kokeza came close to a podium finish in the -100 kg category. The Croatian showed a solid performance but in the end of the day, had to settle for a 5th place.

In the category under 70 kg, a silver medal went to Marlene Galandi of Germany. The former Cadet European- and World Champion wasted no time on her way to the final, winning all of the preliminary rounds with IPPON. This was Galandi’s third silver medal this season - Great consistency from this young athlete, who we are sure to see on the top spot very shortly!

In the same category, Hungarian Renata Lorinc, just missed out on a medal. Lorinc made it all the way to the semifinal but unfortunately ended her day just outside the podium. Nevertheless, Lorinc seems to be in a good development at the moment and can be proud of a good performance.

In the -78 kg category there was a bronze medal for Fanni Toth of Hungary. Toth, as well, made it to the semifinal stage, where she unfortunately fell short but came back strongly to take home the bronze medal with an amazing IPPON.

In the men’s heavy weight division, Ivan Covic of Croatia, was able to take home a bronze medal, also showing a good effort throughout the day.

Overall, a very successful weekend for the IPPON GEAR athletes, winning a total of not less than 17 medals and as well, a lot of athletes coming close to the podium.

Especially a very strong performance from the team of Hungary, who won a total of 8 medals and finished second on the medal tally.

This was the last Senior European Judo Cup in the first half of this season, congratulations to all athletes on a lot of great performances in these first five months. Let’s go for more!