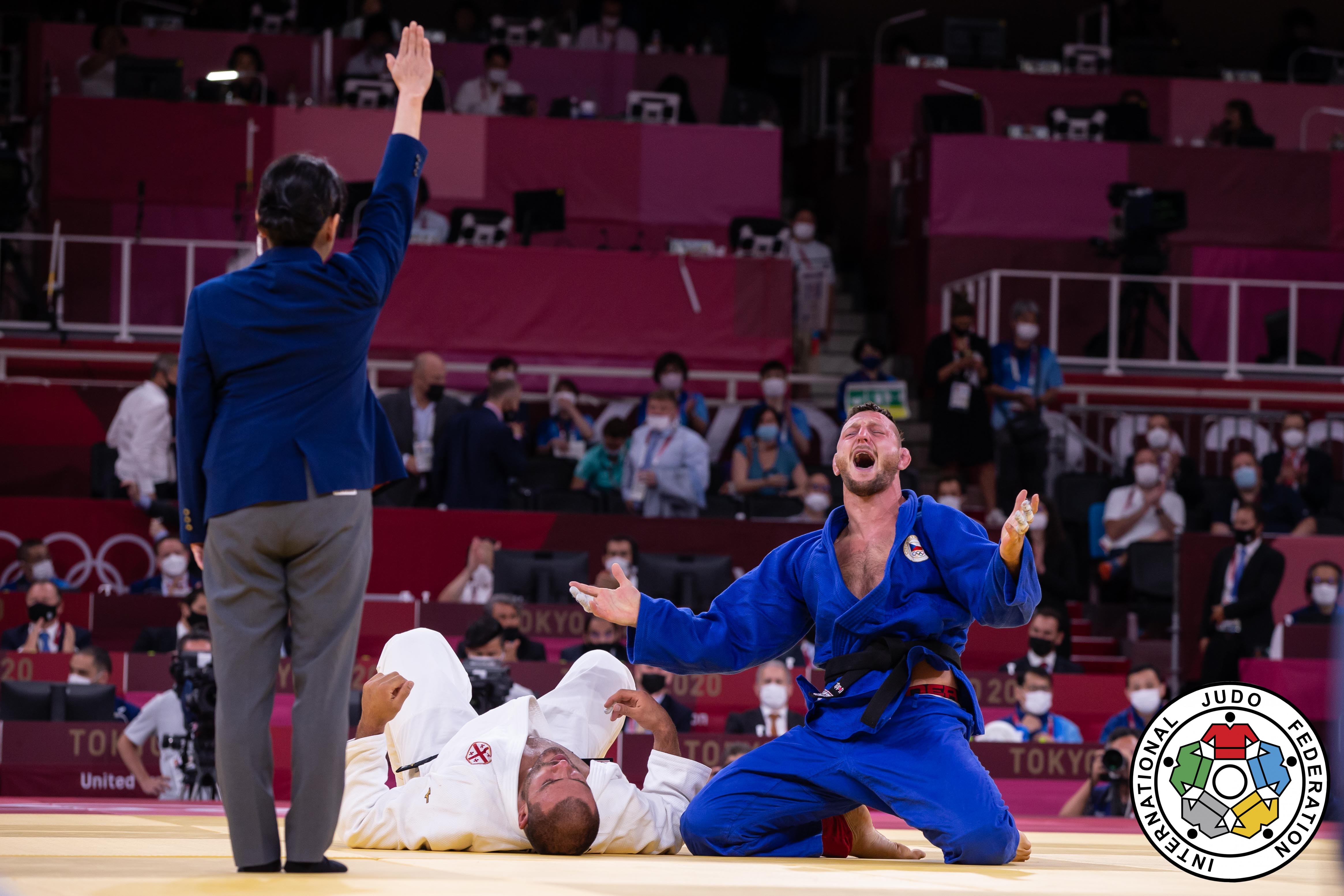 Tokyo showed us yet again that the Olympic Games always will be special. This is the stage every Judoka is dreaming about. Even though it was a different event format without spectators and a year later than planned, we saw incredible performances.

128 nations, 5 continents, 201 men and 192 women. 25 nations managed to place themselves on the medal table. Judo remains the sport with the most participating nations and the biggest medal spread. The last few days proved yet again that the Japanese sport is a worldwide beloved sport with fair play and respect engraved deeply in the sport’s values.

In the end, Japan was the expected dominating country with an incredible number of 9 out of 14 gold medals. Second came the small country of Kosovo, with 2 Gold medals. Followed by Judo nations France and Georgia. Behind that, a big variation of nations could celebrate medals, amongst them 7 of our IPPON GEAR athletes. 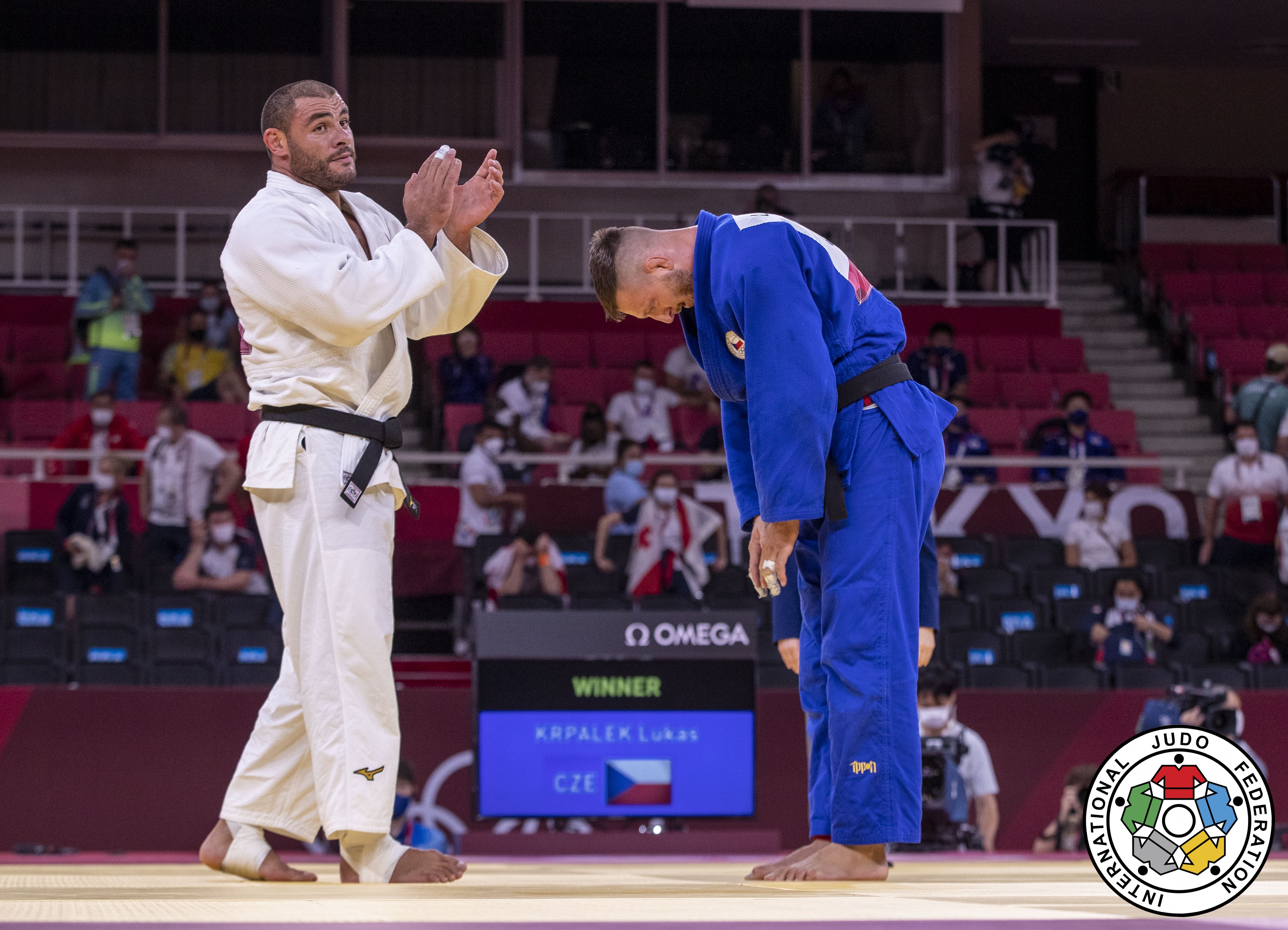 We have to start with legend Lukas Krpalek. 2016 in Rio, he was able to go all the way, winning gold under 100 kg. 4 or better said 5 years later, he tried to do the impossible one category higher - to win olympic gold in the competitive heavy weight division,.

In his first heavy weight year, Lukas Krpalek directly won the European Championships and European Games in Tel Aviv 2018. Only one year later, he fully made the transition to the new weight class by clinching the heavy weight world title. Since then, many athletes claimed the throne of being the #1 +100 kg fighter.

First and foremost, Teddy Riner who wanted nothing but his 3rd Olympic title. Followed by Georgian World Champion Guram Tushishvili, the Russians Inal Tasoev and Tamerlan Bashaev, Henk Grol and Roy Mayer from the Netherlands, or Hisayoshi Harasawa of Japan, just to name a few.

It all led up to the Olympic Games. The event where the best will be at their best. And Lukas Krpalek did not disappoint a second. He decided to go down to 111 kg, to feel more comfortable, be faster and fitter. This decision also made him the lightest heavy weight fighter in the field.

After beating Oltiboev from Uzbekistan, the Czech legend saw himself confronted with Japan’s Harasawa to battle it out for the final ticket. And what a fight Lukas gave the Japanese. While Harasawa only tried to control Krpalek with his weight advantage, Krpalek stayed active the whole time. The Golden Score brought the decision for the Czech Olympic Champion with a beautiful Harai-Goshi throw. The medal was secured, gold was on the table.

In the final, Lukas Krpalek faced 2018 World Champion Guram Tushishvili who was in outstanding form throughout the day. This time, it was Tushishvili leading the fight, but Kpralek waited for this one chance that could crown him Olympic Champion again. In the last 30 seconds, the Georgian started another drop Seoi-nage attempt, which Krpalek countered for Wazari, followed up by a hold down. Gold for Krpalek!

Afterwards, we saw pure emotions of the Czech double World and European Champion who is now the first ever Judoka winning two Olympic titles in two different categories as well.

LUKAS, YOU ARE A LEGEND AMONGST THE LEGENDS NOW! 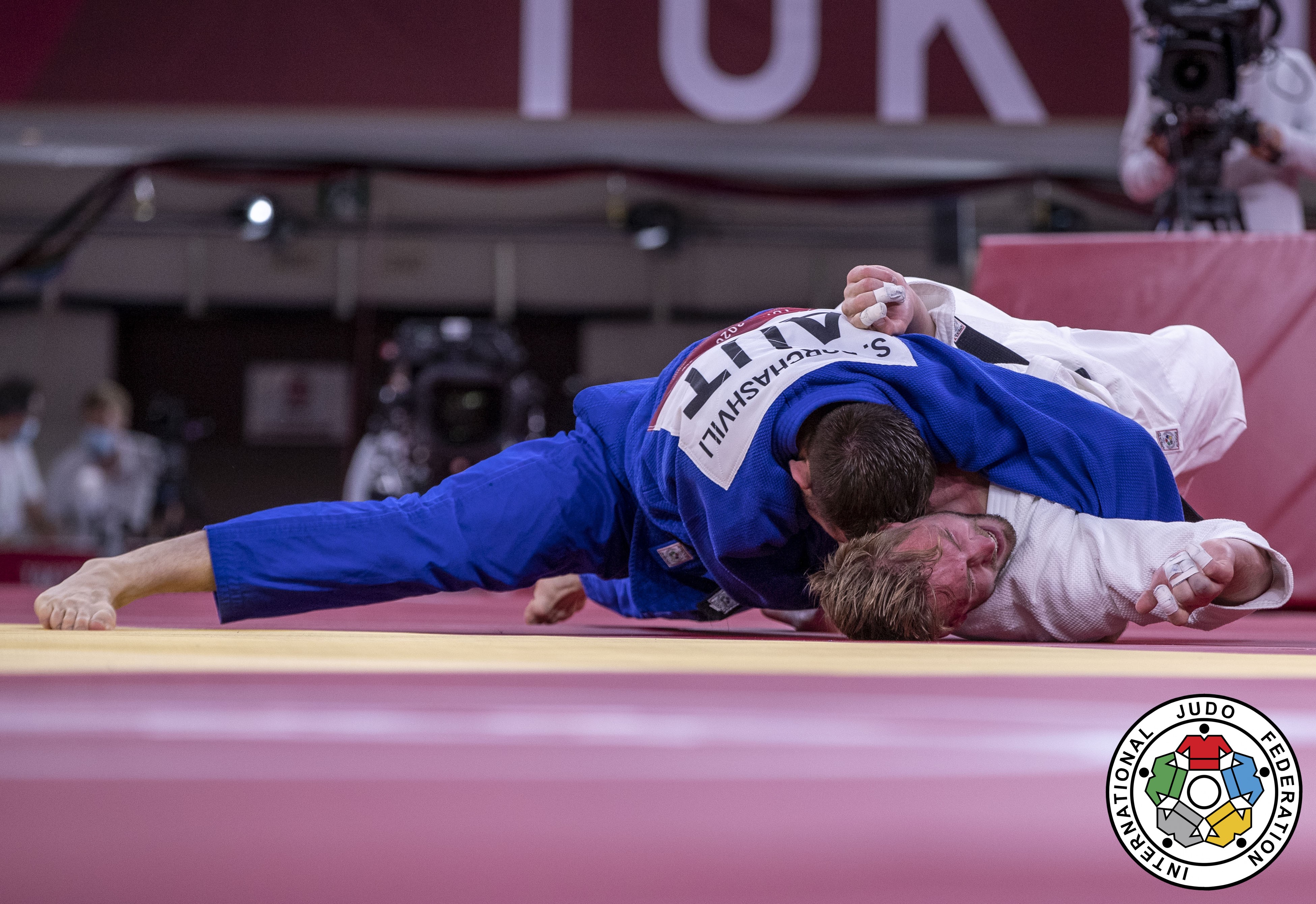 Another fairy tale is the Olympic performance of Team Austria who won their latest Olympic Judo medal in Beijing 2008, namely by Ludwig Paischer -60 kg. The wait was over on day 4 of the 2021 Judo competitions in Tokyo when Shamil Borchashvili surprised the whole field.

The development the Austrian -81 kg fighter took the past months is extraordinary. In the competitions ahead of the Olympic Games we could already feel the potential of Borchashvili. In Tokyo, Shamil showed everything he’s got.

Mollaei was yet too strong that day but Borchashvili left no doubt in his Bronze medal match against German Ressel that the medal is his today. 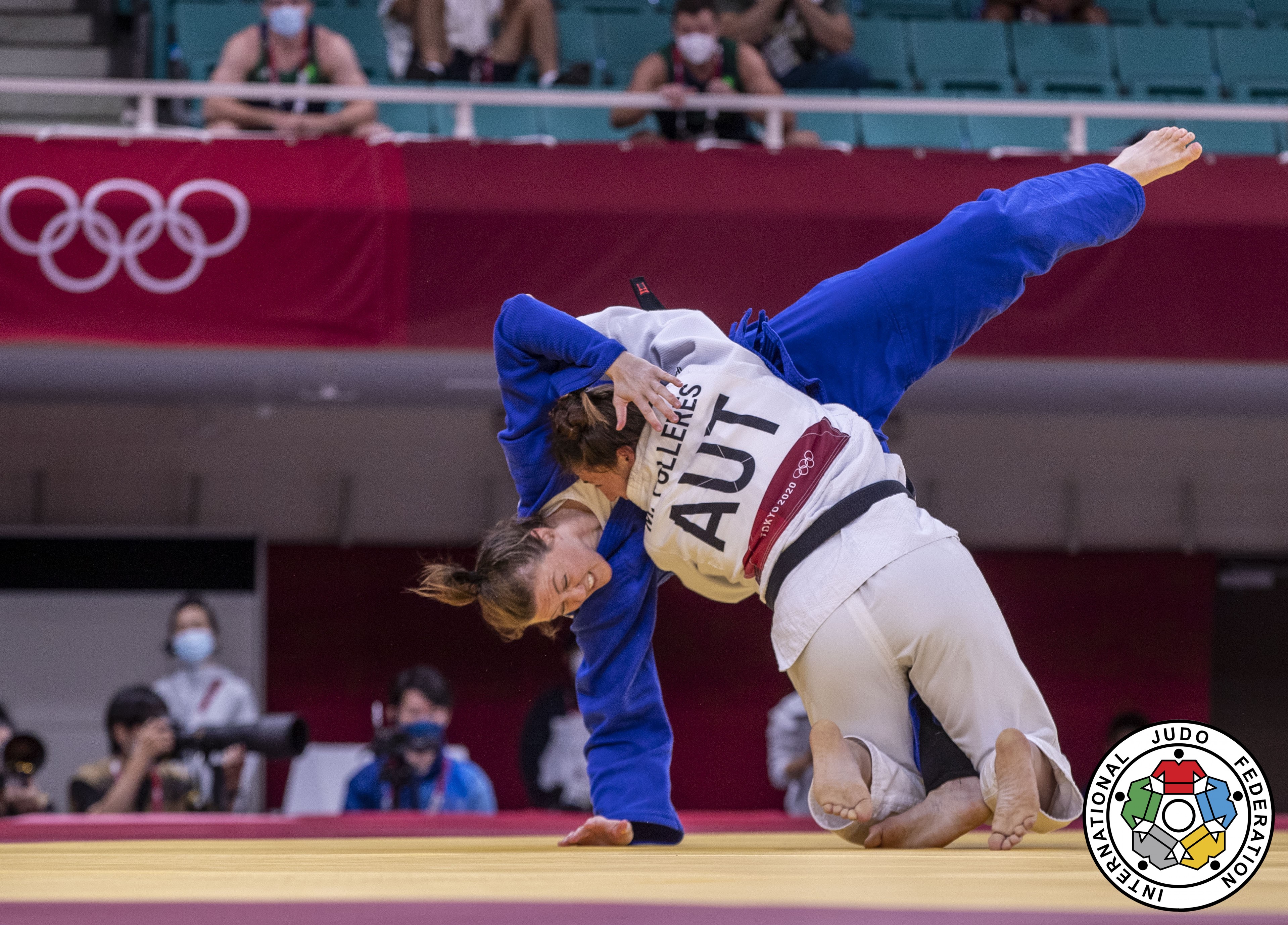 Just one day later, the Austrian run went on. This time in the -70 kg women division. Michi Polleres, qualified as the #6 seed and faced reigning Croatian World Champion Barbara Matic in the quarter final. In a very controlled fight, Polleres advanced to move on to the semis where she met Sanne van Dijke, the #1 seed in the draw.

With another outstanding performance she booked the ticket for the Olympic final where she lost to Japanese Arai but won an amazing Olympic Silver medal.

WHAT A PERFORMANCE, MICHI!

A dream result for the Austrian squad and head-coach Yvonne Bönisch who just recently started her work within the Austrian Judo Federation. “She had an enormous impact on the performances and mental condition of the Olympic team”, said Austrian president Martin Poiger. 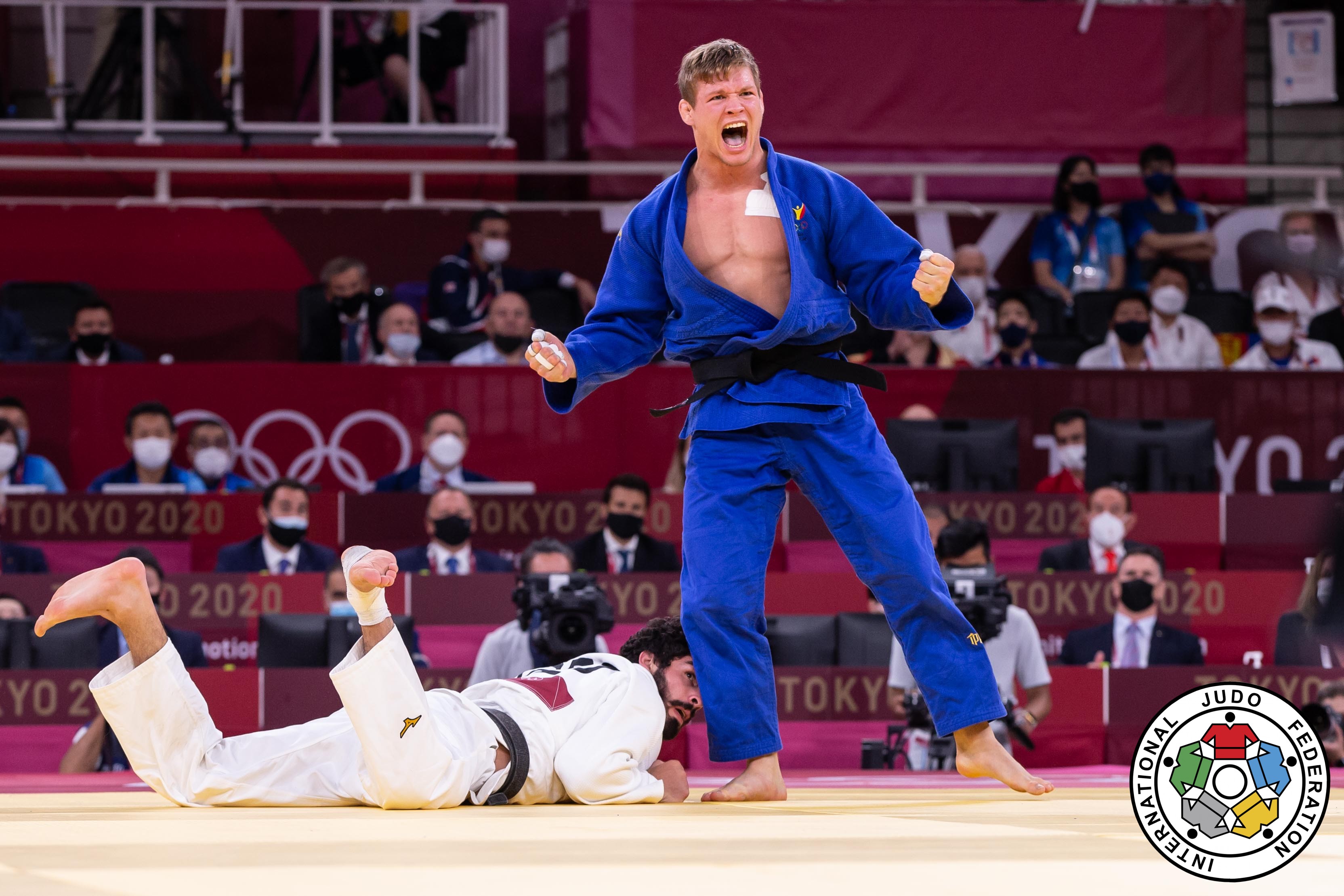 CASSE GETS HIS FIRST OLYMPIC MEDAL

In the -81 kg category, we saw another title contender on the tatami. Belgian reigning World Champion and number 1 ranked Matthias Casse had nothing but an Olympic Gold medal in mind. In the end, he brought home a strong bronze medal. A brilliant 2021 for the 24-year-old Casse so far winning World Championship gold, European Championship silver and Olympic bronze, all in the same year.

The bronze medal was secured in a tough match against raising star Tato Grigalashvili (GEO). Both met just a few weeks ago in the World Championships final and Casse won both matches with tremendous IPPON wins.

A very long journey of 5 years is coming to a close but Casse is already hungry for Paris 2024, where he wants to golden his Olympic bronze medal.

YOU GOT THIS, MATTHIAS! 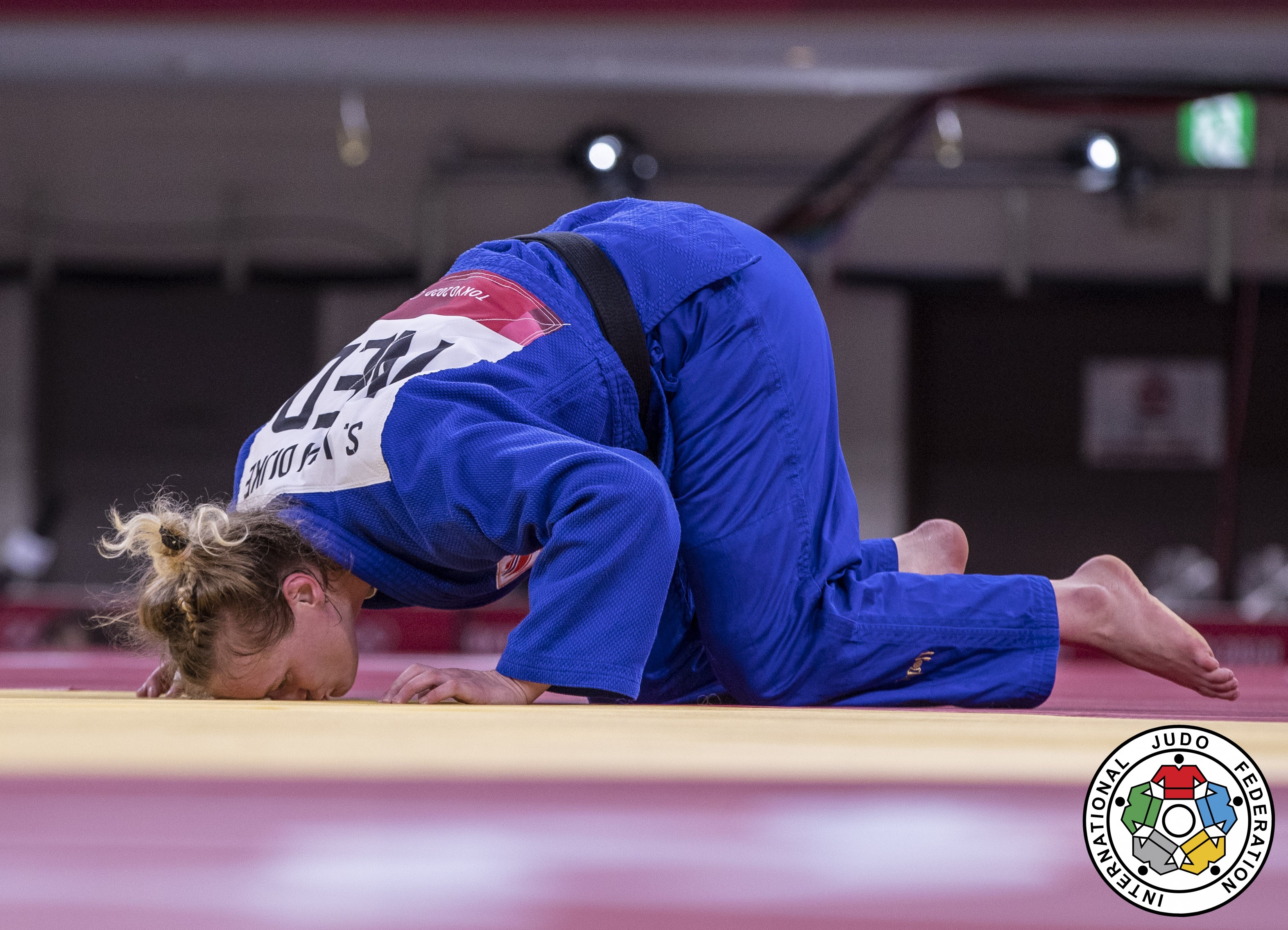 Sanne van Dijke came to Tokyo with a golden mission. The 2021 European Champion arrived for her first Olympic Games as the #1 seed in the draw and just a few weeks earlier, she won a bronze medal at the World Championships in Budapest with the feeling she could have won gold. Now, in Tokyo her motivation had grown higher than ever.

She went straight to the semi-finals, but a small mistake against an in form Michi Polleres (AUT) costed the wanted ticket into the Olympic final. She recovered quickly for an intense bronze medal match against German Scoccimaro. A rematch of the World Championships bronze medal fight. In an over 11 min fight, she showed yet again her strong willpower and defeated the dangerous German to secure her first Olympic medal.

SANNE, YOU DESERVE THIS MEDAL! 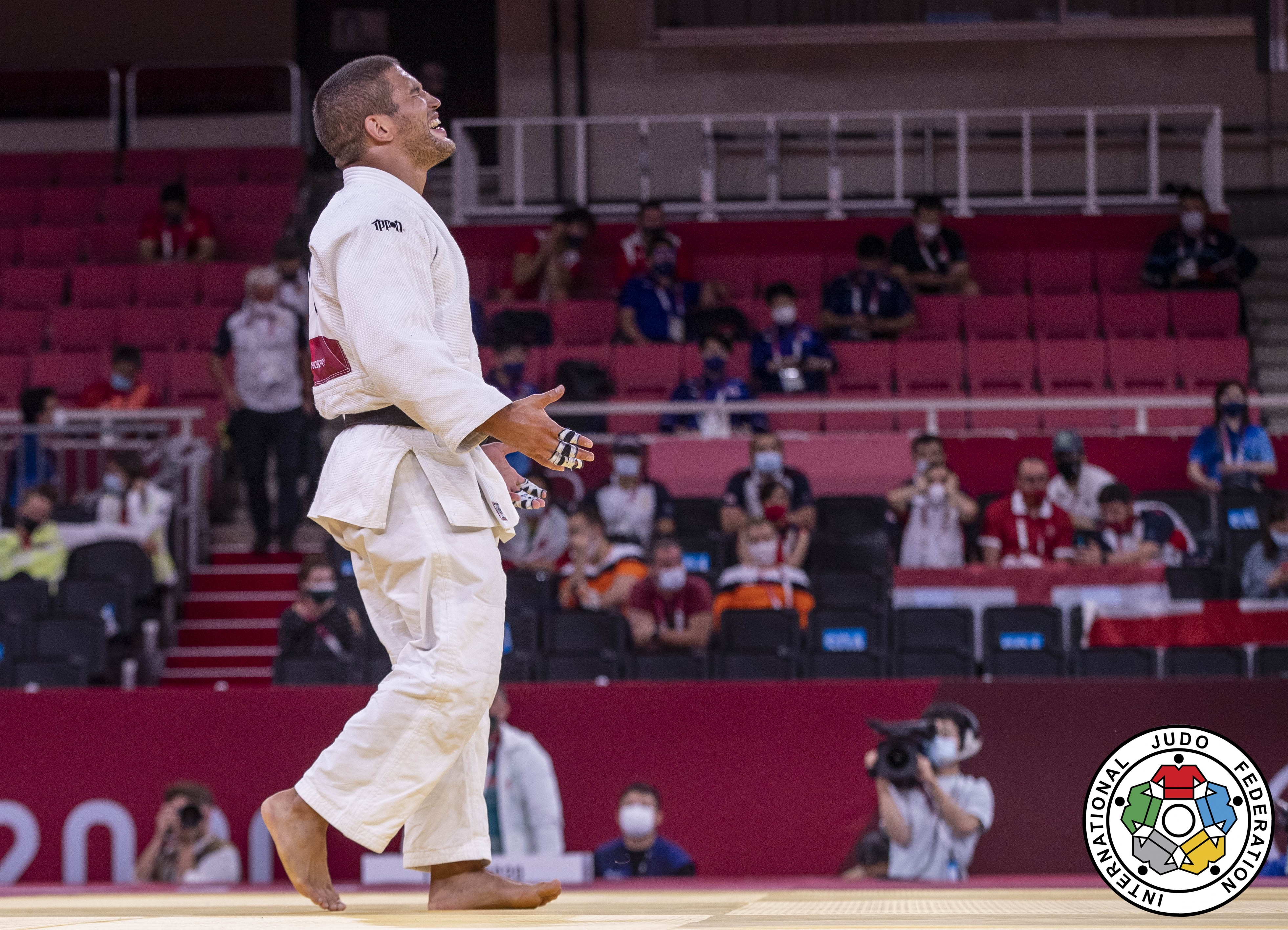 With only 27 years of age, Krisztian Toth is amongst the most experienced fighters in the -90 kg category. Already at a young age, Toth collected several big medals at World Championships, European Championships, and in all formats at the IJF World Tour. The only one missing was the Olympic medal. In his second participation at Olympic Games, he managed to close the circle.

After defeating Misenga of the IJF Refugee Team in first round, he faced Japanese Munkai in round 2. In golden score he booked the ticket for the quarter final. There, he faced the man of the day, Eduard Trippel from Germany. Trippel had the day of his life going all the way to the final where he secured a surprising but deserved silver medal.

Toth had to come back through the repechage and was faced with World Champion Noel van T End (NED). A wazari win opened the door for the desired Olympic medal. In the bronze medal match, Russian Igolnikov started off strong, using his size advantage against the smaller Hungarian. But Toth stayed calm, even after two penalties and waited for his chance in golden score to defeat the powerful Russian. The relief was visible and the signature smile of Toth was back in his face.

KRISZTIAN, WE ARE PROUD OF YOU! WHAT A CAREER! 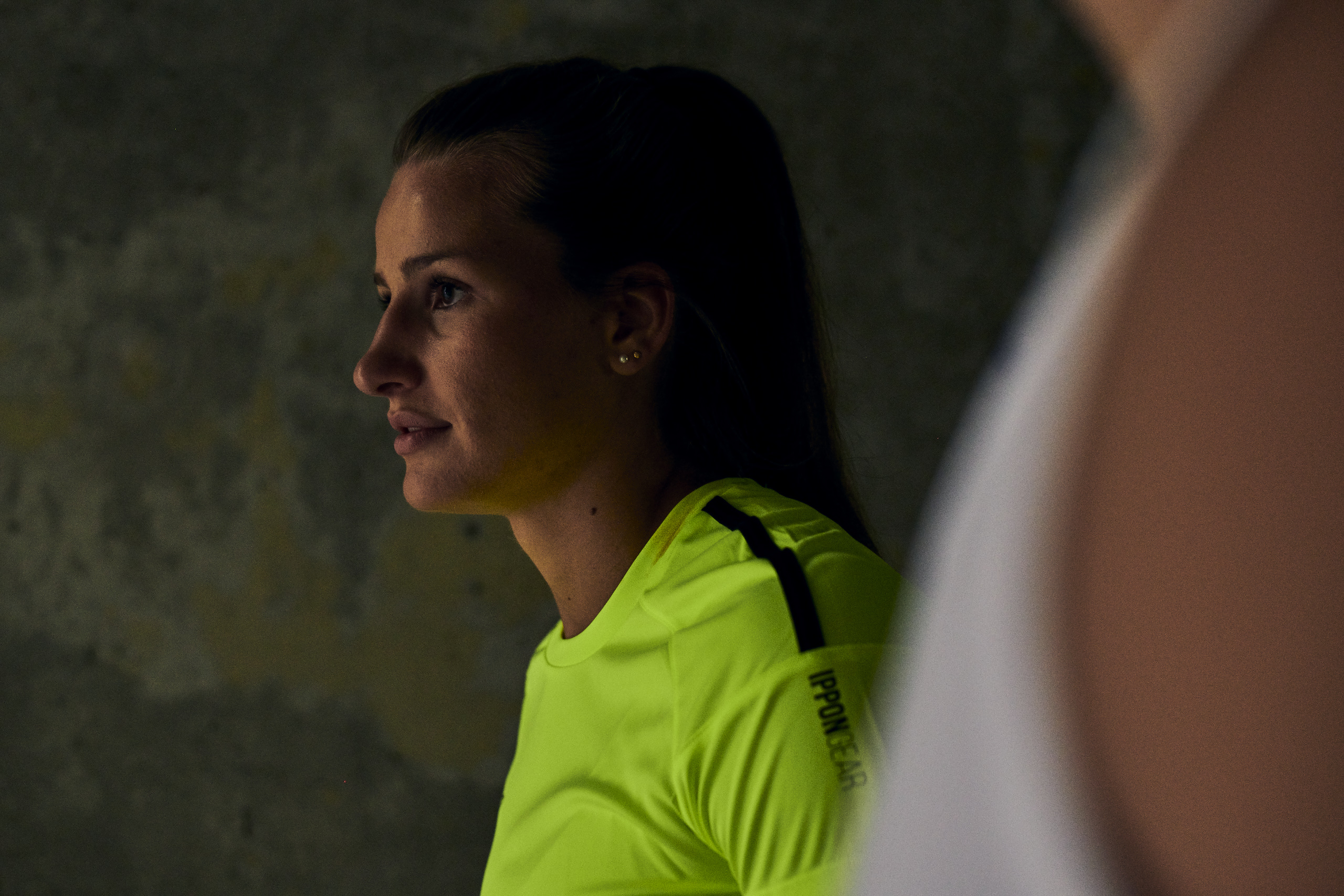 Anna Maria Wagner was the outstanding fighter in the -78 kg category of the past months, winning two Grand Slams and the World Championships in 2021.

She started off strong, with an IPPON win against Sampaio (POR) and a golden score win against 2-times World Champion and Brazilian legend Aguiar. In the semi-final, she faced home nation’s Hamada from Japan. In a close battle, Wagner lost out with a small ne-waza mistake. The German was sent into the bronze medal match with a small injury she took from Hamada’s armbar.

There, she faced Cuban Antomarchi, an opponent she never lost to before. The pressure was there but Wagner left no doubt about her spot on the podium. After 4 minutes, she kept the upper hand with a wazari win to secure her first but very likely not last Olympic medal.

THE FUTURE IS YOURS, ANNA! 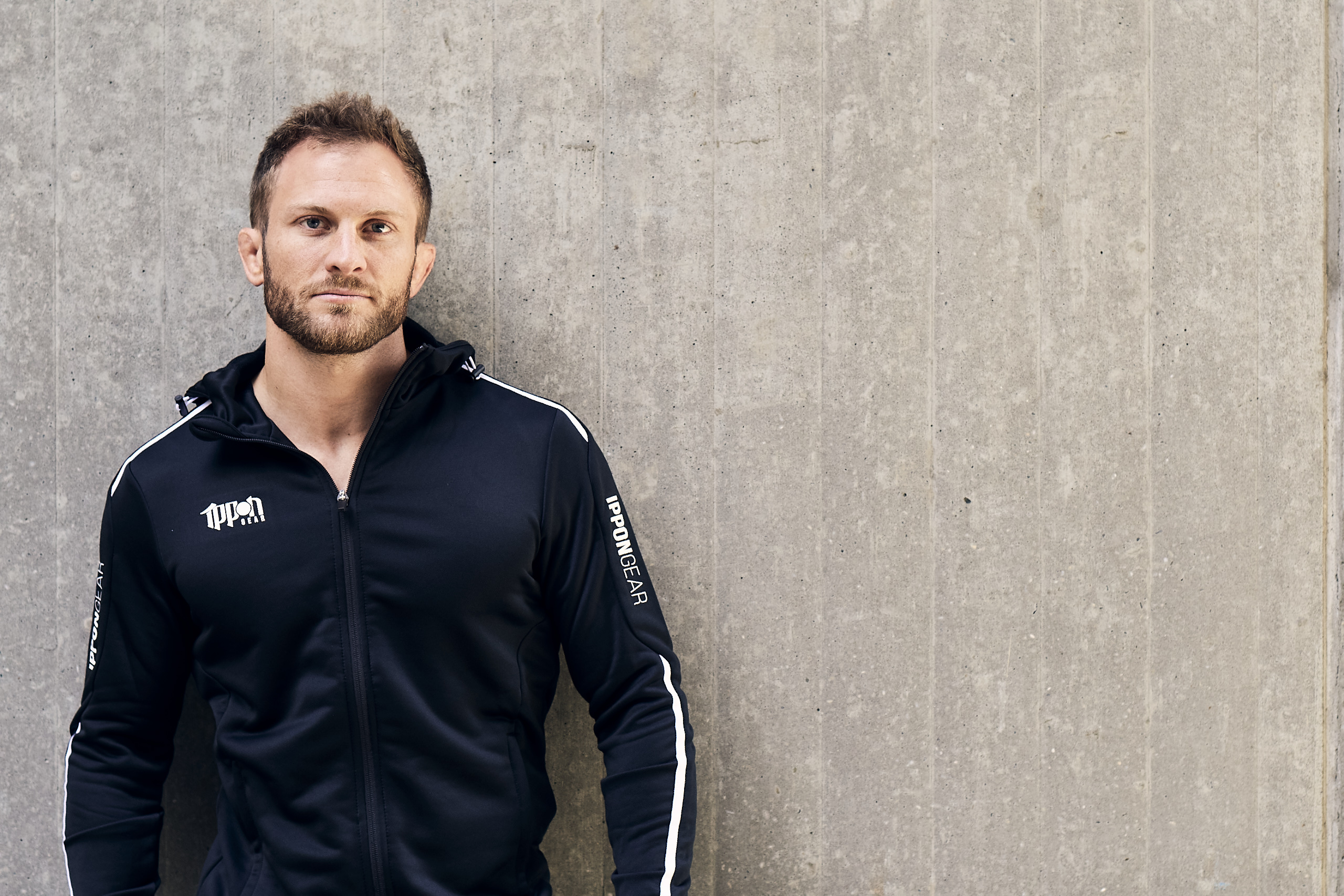 On day 8 of the Olympic Judo days, we saw a premiere of the mixed team events. Several teams claimed medal hopes but as always in team competitions, there is no medal guarantee in those emotional battles.

A team spirit often decides about win-or-lose. This was proven by the French team as they shook the world by beating the home nation and clear favourite Japan in a thriller final.

THE FIRST OLYMPIC PERIOD FOR IPPON GEAR IS COMPLETED

The first Olympic period for the IPPON GEAR brand is ending. It was intensive months with big results, a Covid crisis and now, a dream finish at the Olympic Games.

A total of 7 single medals, 1 Gold, 1 Silver and 5 Bronze medals is more than we ever dreamed of at our first Olympic Games. The historic gold medal for Lukas Krpalek on the last day was the icing on the cake.

We are highly motivated and are looking forward to a new chapter, a new chapter towards Paris 2024 with amazing young athletes in the team, all with ambitions to win medals at the next Olympic Games.

We are proud of all the athletes competing in IPPON GEAR in Tokyo. Also, the athletes that couldn’t finish their dream with a medal. To qualify for this extraordinary event is already a big achievement and all of you can be proud of the past years.

To all athletes, whose careers ended with Tokyo 2020, thank you for your trust in IPPON GEAR. It was a pleasure to team up with you and we wish you only the best for your personal next chapter. We hope you stay in the Judo family and we meet in the future. All the best!