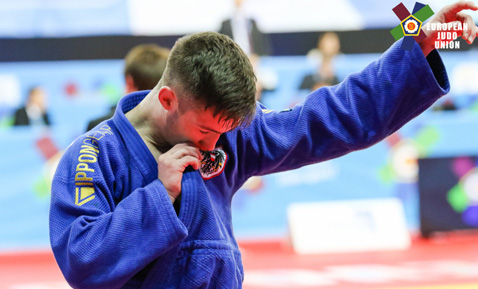 The Cadet European Judo Championships was held this weekend in the capital of Bosnia-Herzegovina, Sarajevo. 457 athletes spread over 42 nations took part in the competition. The IPPONGEAR athletes took home one gold medal, two silver medals, and five bronze medals.

It was a golden day for Richard Sipocz from Hungary in +90 kg who reclaimed his European Cadet Champion title from 2016 after finishing second last year. Sipocz impressed throughout the whole day and won all his fights on ippon and he could finish his last year as a cadet on top of the podium with the Hungarian national anthem in the background.

Additionally, to Sipocz’s gold medal performance Hungary was also able to take home three other medals. Gergely Nerpel came in as the number one seed and finished his day in -73 kg with a bronze medal around his neck. In the -90 kg category, Hungary took another bronze medal as Zsombor Veg fought his way through the repechage to claim the medal.

Austria also made an impressive performance at the Championship by grabbing two bronze medals. The first one was won by Daniel Leutgeb in -55 kg on day 1 of competition and Lisa Grabner picked up the second bronze medal for Austria on day 2 in -57 kg.

The rest of the Austrian team showed that they are close to the top as well as 5 other players found themselves in bronze medal matches just falling short of the podium and finishing fifth. The players were Vache Adamyan, Samuel Gassner, Andreas Wagner, Anika Schicho and Rosalie Woess while David Kleiber finished 7th.

Similarly, to that Hungary also found themselves close to more medals as Balint Gombas and Jennifer Czerlau missed the podium and both finished fifth. Meanwhile, Brigitta Varga and Anna Kriza finished on 7th places.

All in all, a good competition for all the Ippon Gear youngsters who showed that they are some to watch in the future and that it is only the beginning for them.