TRIPLE GOLD FOR HUNGARY IN SARAJEVO 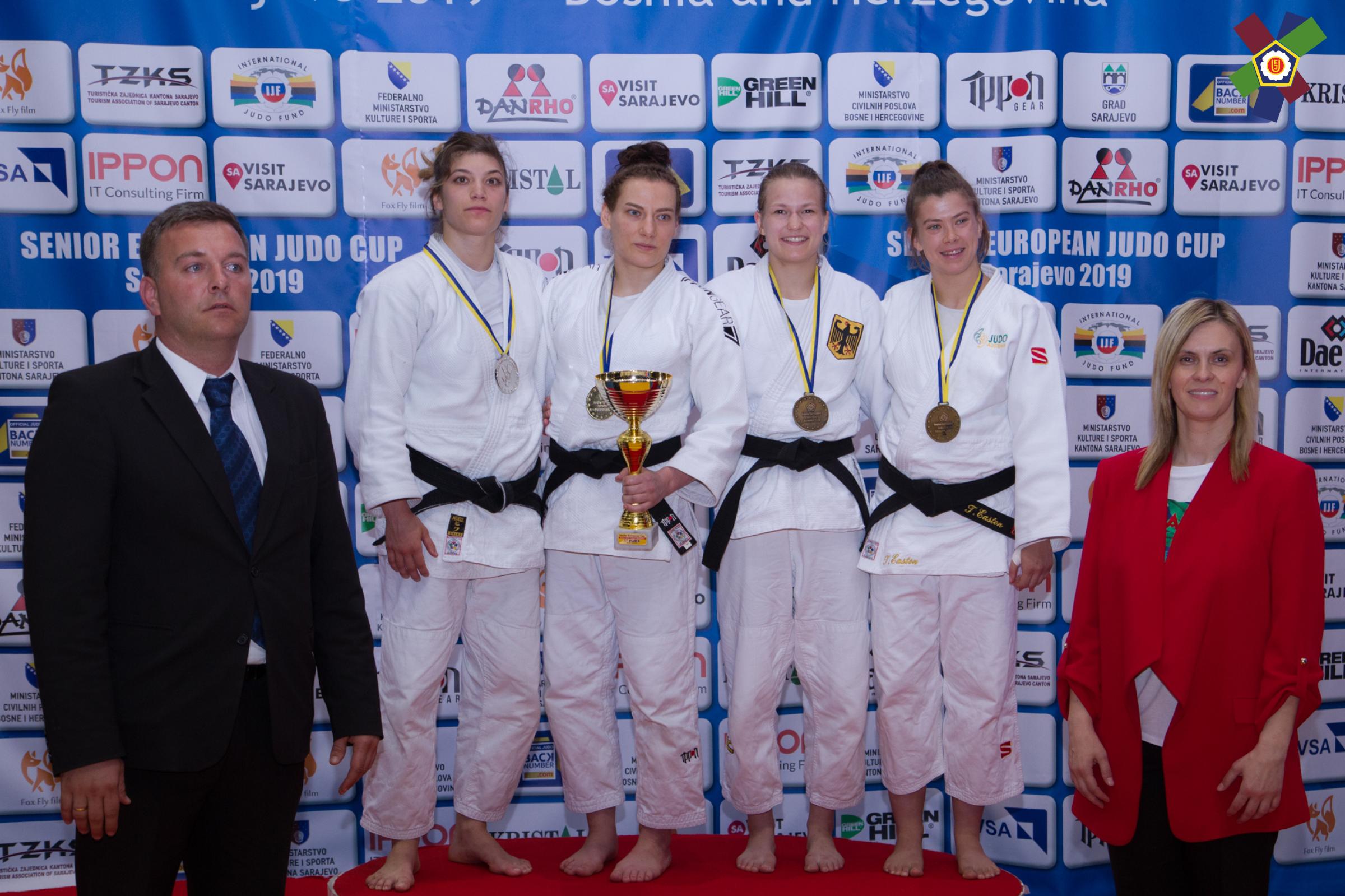 This weekend, the third Senior European Judo Cup of the year was taking place in Sarajevo, Bosnia and Herzegovina. A lot of IPPON GEAR athletes were present and we can sure be more than happy about the outcome of this weekend! 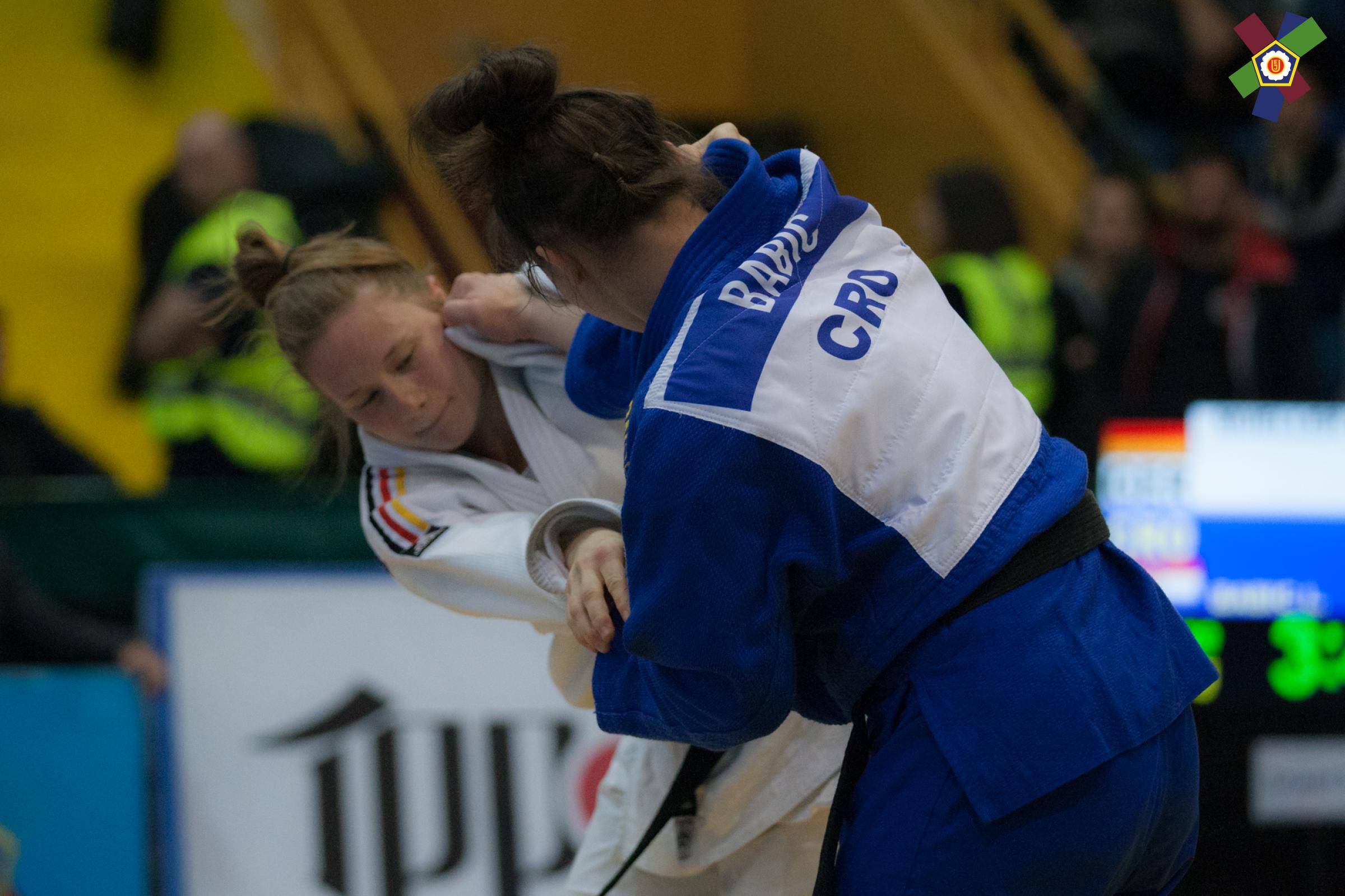 On the opening day of competition, first and foremost, there was a gold medal for Renata Lorinc of Hungary in the category under 70 kg. Lorinc had a good performance and in the end of the day, she could be happy about picking up her first ever gold medal at a European Judo Cup. In the final, Lorinc defeated another IPPON GEAR athlete; Aleksandra Samardzic of Bosnia and Herzegovina. Samardzic has won not less than four previous editions of the Sarajevo European Judo Cup and was a clear favorite to take the gold medal this weekend as well. Nevertheless, on this occasion, Lorinc was the one coming off as the winner, after a tough battle, which was decided in Golden Score.

In the same category, there was also a bronze medal for Lucija Babic of Croatia. Babic previously won several European Judo Cup medals in the category under 63 kg and this weekend, she could celebrate her first ever medal in her new weight category. Babic is still a Junior and we are looking forward to see what this season has in store for her.

In the same category, Croatian teammate Lara Kliba ended her day with a 7th place.

In the -78 kg category, there was a bronze medal for Lea Gobec of Croatia. Gobec already picked up her first European cup medal this season and this weekend, she could add another medal to her collection.

She could share the spot on the podium with another IPPON GEAR athlete, namely Fanni Tóth of Hungary. The current Junior European bronze medalist won various Junior European Judo Cup medals but this weekend she was able to win her first ever medal in the Senior division.

The +78 kg category, was an all IPPON GEAR affair and the women of team Hungary and team Croatia continued on their winning streak. 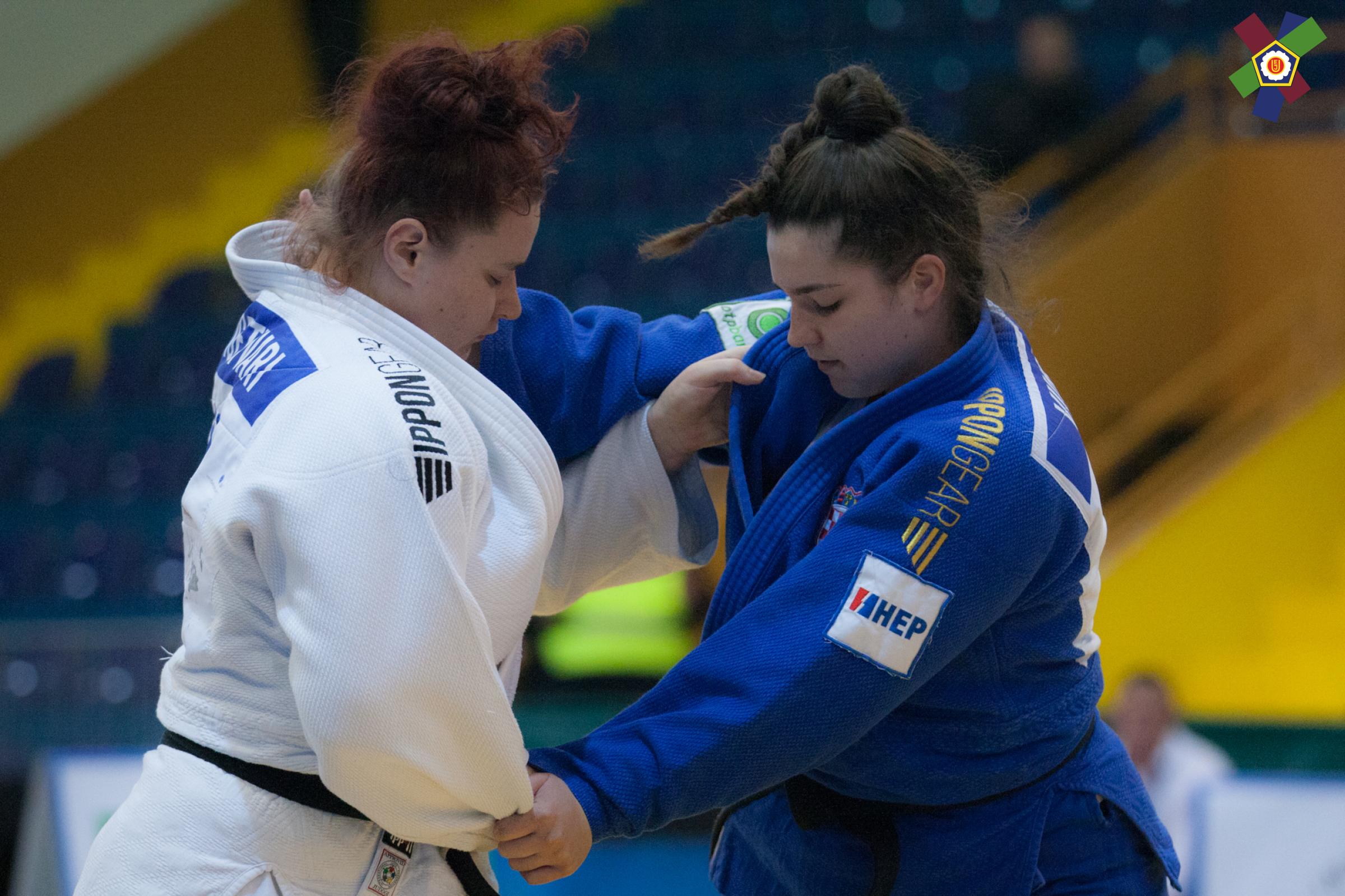 First and foremost, the gold medal went to Mercedesz Szigetvari of Hungary, who could follow up her team mate Renata Lorinc and raise the flag for Hungary. The current Junior European Champion left no doubt who was the best judoka on the day and won all of her matches in convincing style - with IPPON.

The silver medal went to Katarina Lucija Vukovic of Croatia, who could be happy about picking up her first European Judo Cup medal this year.

The first of the bronze medals, went to Tina Radic in an all-Croatian battle, when she faced teammate Zrinka Miocic. Radic made it clear that she was the better of the two, coming up with an IPPON win after only two minutes. Nevertheless, a good performance of teammate Miocic who had to settle for a 5th place.

The second of the bronze medals went to Kitti Nagy of Hungary. Nagy ended with a 5th place at the European Judo Cup here in Sarajevo last year, but this weekend, she was able to change that to a bronze medal - her first medal of the season.

On the second day of competition, the lightweights were following up the good results from the opening day. 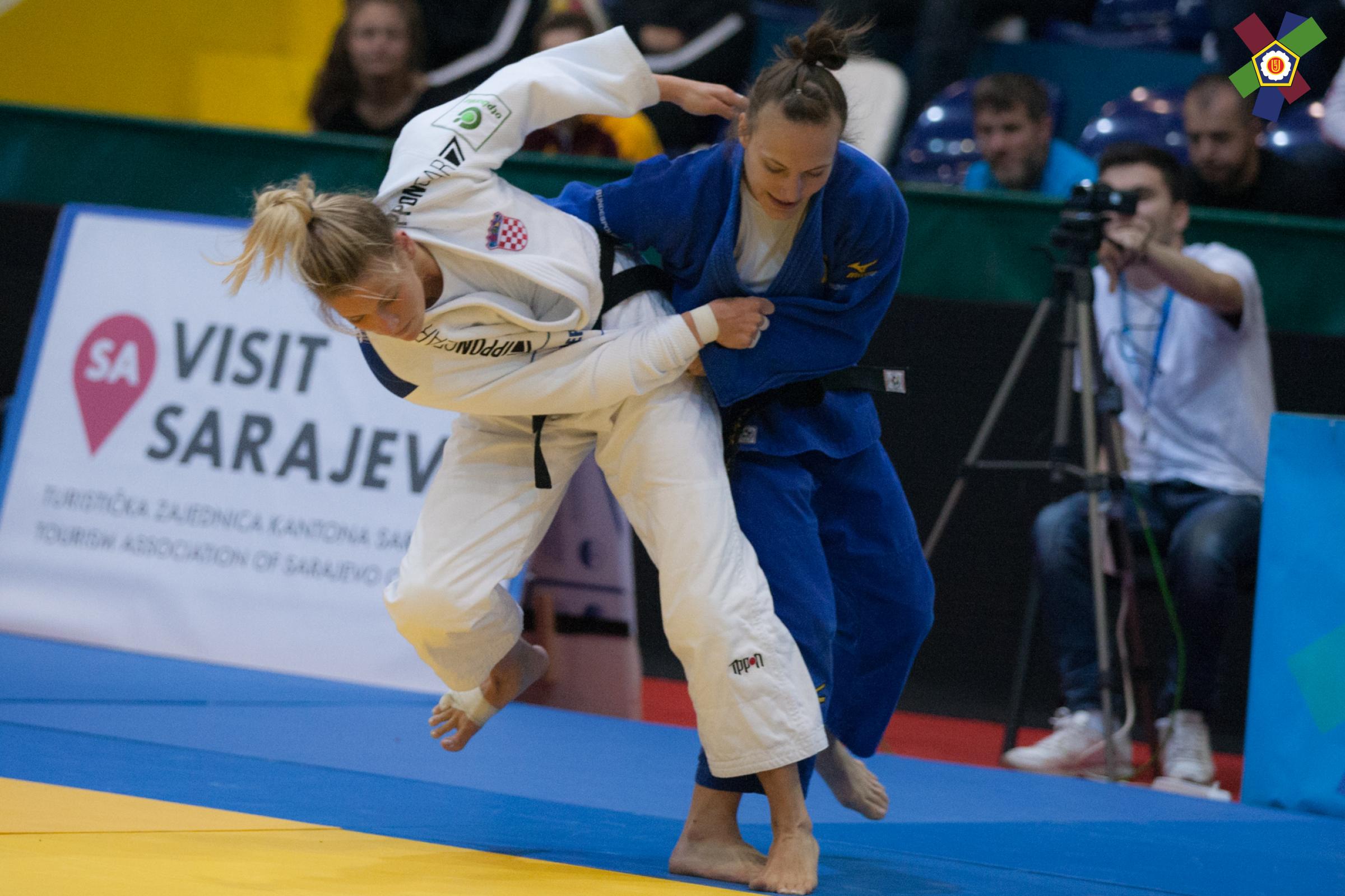 Emoke Knetig of Hungary managed to win her country’s third gold medal here in Sarajevo in the category under 52 kg. Knetig showed good judo throughout the day and won all of her matches in impressive style. The Hungarian already won three European Judo Cup bronze medals, but this time she could be happy about picking up her first ever gold medal.

In the same category, Olivia Taroncher of Austria just missed out on a podium spot. Taroncher did as well have a good performance but in the end of the day, the Austrian had to settle for a 5th place.

Sara Matijevic of Croatia could find herself in the final of the -48 kg category. The Croatian lightweight ended her day with a silver medal but could be happy about having picked up her second European Judo Cup medal of her young career.

Sikic is still gaining ground in her new weight division but has already fought in three European Judo Cup finals and this weekend, she managed to win another medal - We are sure that the golden one is soon to come!

In the same category, Kitti Kovacs of Hungary managed to take a bronze medal. She did as well have a good performance and could be delighted about having won her first ever European Judo Cup medal on Senior level.

In the category under 63 kg, Kira Katzenmajer of Hungary ended with a 5th place. Katzenmajer showed good judo throughout the day and could soon find herself in the semifinal, having beaten the number one seed on the way. Unfortunately, she ended up just missing out on a medal but a good performance from the Hungarian.

On the men’s side, a bronze medal went to Mathias Czizsek of Austria in the -73 kg category. Czizsek had a great performance on the day and made it all the way to the semifinal, where a small slip cost him the victory. In the bronze medal match, Czizsek fought back and came up with an IPPON win to take his first ever Senior European Judo Cup medal.

In the category under 66 kg, Tomas Binhak of Czech Republic narrowly missed out on a medal. Binhak did as well make it to the semifinal, but in the end of the day had to settle for a 5th place after a tight match. Nevertheless a good performance from the young Czech, who is only in his first Senior year.

Last but not least, Austrian Valentino Krnjic finished with a 7th place in the category under 60 kg.

A very successful weekend for Team IPPON GEAR is coming to an end. The athletes won a total of 13 medals and especially the Hungarian and Croatian women were shining this weekend - The Hungarian team could celebrate not less than three gold medals which put them on a second place on the medal table.

Congratulations to all athletes on a lot of great performances this weekend, we are proud of you!